The latest table through the shop has a dissapearing taper on the inside corner, this along with a roundover profile picks up on design elements found in the chairs the client chose.

I begin with the legs, milled square and cut to length, mortises cut.

A sled is made for the planer, the taper dictated by the amount of rise. The planers feed rollers act on the stock, so a front stop is used to keep the leg onboard. I'll also send the jig through the thickness sander, its feed belt pushes the sled, so a rear stop is also installed.

The sled is passed through the planer.

Because the planers feed rollers marr the stock at the top of the taper, I stop short of the final goal.

Paying attention to grain direction, the taper is finished on the jointer.

The legs can be proven consistent when the taper makes a perfect disappearing square.

I like making shapes and flipping them around to form other designs, it creates inspiration for other projects. I wonder where I could incorporate this interesting pattern.

I wasn't able to get a photo of this table in the clients house, so to illustrate the relationship between this leg and the chairs here's a photo of a similar table I made several years ago. 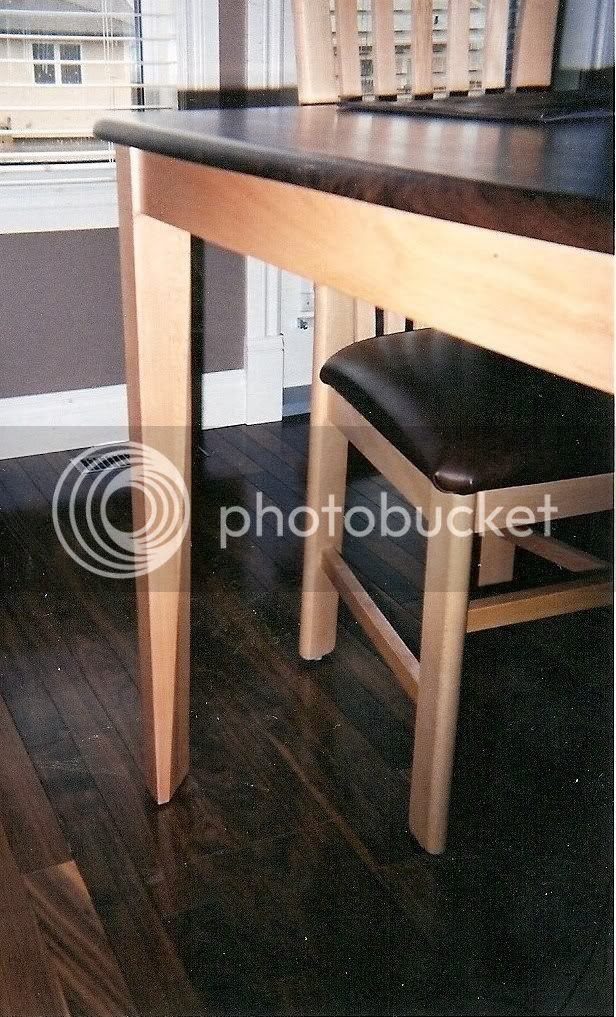 I was able to take a second class this week, Surface Design with Michael Hosaluk. Although I love wood grain and try to use it to greatest impact, I understand that surface ornamentation can have very positive results on a piece and I wanted to learn more about it. Mike has been using a number of procedures for altering the appearance of wood for years, and I was interested to learn his techniques.

The day started with a short talk on surface design and how it relates to form. Mike described his processes and his inspirations, drawing from his Ukranian background being surrounded with cultural colour and pattern. His thoughts toward design centre around unfearful experimentation, constantly trying new processes and learning from the results, whether sucess or failure.

He brought plenty of examples for inspiration and review.

Techniques covered included the use of paints, milk and acrylic.

Woodburning, and gold and silver leafing were also covered.

After an introduction to all the methods, the class was given basswood blanks and free reign to try each technique in whatever fashion they saw fit.

Halfway through the afternoon the class stopped to show their work, describing their techniques, thought processes, and inspirations behind what they had done. Succeses and failures were discussed for the education of all.

I had enough time after the discussion to do a small piece encompassing all the techniques I had learned througout the day. I used relief carving, layered milk and acrylic paint, silver leaf, graphite, and wax to create this, a design I like and may tweak for use in the future. I left the class feeling creatively charged, and am excited to use these techniques in my work.

Posted by Darnell at 9:08 AM No comments:

I am a fortunate woodworker. I live in an area homesteaded by people with the strength to withstand the harsh climate, and the resilency to carve a home and living from the prairie. The spirit of these immigrants still lives here, the importance of craft and family is strong. Several guilds make their home in my small city, inventiveness and collaboration make this a hot spot for fibre, glass, ceramics, paint, and every other media at an artists disposal. The Saskatchewan Woodworkers Guild, Hub City Woodturners, The Saskatchewan Craft Council, and The Saskatchewan Arts Board encourage local innovation and excellence in wood.

If I were to choose one person who embodies the spirit of Saskatchewan art, it would be Michael Hosaluk. Tireless innovation, constant consideration, and a complete lack of pretention has made him the backbone of local craft. His mastery of the lathe and complete approachabilty has resulted in him becoming an instructor in high demand, his work has taken him around the world. I had the opportunity to take two classes under his instruction this week, the first was about woodturning.

His personality is easy going, his instructing style intelligent yet informal. We were allowed to move around as we pleased, I spent much of the day standing behind him and watching over his shoulder as his tool made contact with the work.


Here he is making a wine bottle stopper. After he used a chatter tool to cut a design on the top he demonstrated doing the same to the sides with a gouge, a technique he laughingly calls "chowder, not chatter".

He also did some multi-axis work, which results in a mind boggling blurr as it rotates on the lathe.

He then switched to bowl turning. Here he is making a thin walled Madrone burl bowl, using his hand as a steady and a light to gauge the wall thickness. A damp cloth is kept nearby, the green wood walls so thin they must be moistened periodically to prevent them from drying and distorting on the lathe.

From there he made a practical bowl of birch with walls thick enough for daily use.

Next demonstrated was his techniques for making a perfect friction fit lidded box. After the initial form is turned, it is cut apart and reglued into a fantastic shape impossible to make on a lathe.

Througout the day the demonstrations were punctuated with lessons on design. Mike's philosophies on shape are well thought out and eloquently presented. He brought examples of his work as inspiration, and was glad to explain the technical operations behind each piece.

I left the day knowing much more than what I started with, excited to put his ideas to use. I am lucky to have started on the turning leg of my woodworking journey with such an enlightened tutor.
Posted by Darnell at 9:18 PM No comments:

Darnell
I'm a woodworker on the Canadian prairie.